Andrew Vidgen: “I have become increasingly interested in the power of two-handers, just two people, the dialogue, the conflict, the plot – with only two people!”“

Where did you take inspiration from for writing this story?

Well, my ‘day job’ as a clinical psychologist over the past 20 years or so and this usually involves sitting with another person, discussing problems (and solutions); always attempting to be useful to that person in understanding why this problem? Why Now? Why hasn’t it been resolved? How Can i move forward? As you can imagine, it can be complicated. However, essentially it’s just two people sitting across from each other ‘in dialogue’. Also, I have become increasingly interested in the power of two-handers, just two people, the dialogue, the conflict, the plot – with only two people!

Why a priest is appealing to you as a symbol and as a character?

I often ‘see’ a scene before I find the words to describe it and this image came to me of two priests playing cards. A simple scene, but it also brings some intrigue as, for a priest, it is sinful to play cards. But maybe, maybe it’s the least of their sins. Maybe they are so far gone that playing cards and betting on their duties is just the tip of the iceberg. The priest as a character is appealing as there are very well defined lines which they should not cross. However, this is where they find themselves and there is no going back for these priests . As the writer, I am thinking, “How far will they go?”

Talk to us about the style of dialogue: it also feels like a game of cards between the two. How did you work on it ?

I tried to reflect a depth of character in the priests. They are both weary, but there is also desire, jealousy, cunny and wit.

Once I had the scene in my head, and an understanding of the characters and the stakes, I let them ‘be’ in the scene; almost set them loose in the scene to see where they would take me. I wrote this short script in one sitting, but then reviewed and revised. I find it useful to say the dialogue out loud, to get a feel for what it sounds like. I do that alot, if it’s not working ‘out loud’ then I don’t use it.

How further would you develop these themes? What are you working on?

I am working on this as a feature script and would be really interested in developing and deepening the themes of sin, forgiveness ,and redemption.

I am also working on another feature, based on the meeting of two fathers who have lost their children in a terrorist attack. 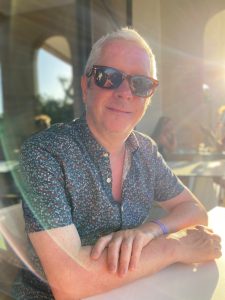