Fadi Baki: ” At my age, I am very aware that the cinema I grew up on is long gone and the filmic experience I now know will be radically different in the coming decades. Cinema has to die to change otherwise it will be forever stuck in past that becomes increasingly meaningless to the present..“

Among the many visionary ideas in the film, the most surprising is the manipulation of archival material: can you technically tell us how you acted in the repertoire?

One of the core ideas since the inception of the film was to use archival material (news footage, film, photography and print) to give this silly idea the necessary verisimilitude. The initial story had us watching the entire film through archival footage only to discover at the end that we are actually watching the robot’s edit of his own history, with the quality of the film stock, the grain, the video and the digital qualities indicating the relative timescape. When that proved too costly we decided to pick the moments we could afford and play them up.

The writing process was very malleable, with scenes in the script that would change drastically depending on the material we found, and sometimes scenes that were borne out of new footage we came across in our research (an example of this being a “scifi party” in the 60’s that had people dressed up as robots which begged for our intervention).

The illusion was achieved using a variety of tricks, intercutting archival footage with material shot to look similar, digital compositing, repurposing footage and hoping nobody would notice, recreating certain periods through different stocks and their looks- and when we just couldn’t film it we’d make a newspaper headline or magazine cover out of it.

Is the man of tomorrow a metaphor for cinema? Acclaimed at birth, today almost relegated to a niche, sometimes enslaved for less noble purposes, but always capable of telling stories.

The Man of Tomorrow is an empty vessel that we can project our metaphors upon, yet his story is definitely intertwined with that of cinema as he can only read himself through the eyes of an audience. The idea of coming alive to the sound of applause was key in conceiving his character, a legacy attached to someone who has done nothing to deserve it. How can someone grow with that kind of weight on their shoulders? The Man of Tomorrow thus casts himself as in the likeness of the images he sees: falling for the celebrities on the silver screen, enacting the machismo of action movie leads, until the battles spill out of the screen and into the civil war of Beirut. What the character ends up doing is believing it’s own mythology, getting stuck in a loop, editing and reediting history to reshape his story.

In a moment of the film, is said that Manivelle “never die”. Do you think the same about cinema?

Manivelle never dying is a curse that means he will forever survive with the knowledge of everything he has done. At my age, I am very aware that the cinema I grew up on is long gone and the filmic experience I now know will be radically different in the coming decades. Cinema has to die to change otherwise it will be forever stuck in past that becomes increasingly meaningless to the present. 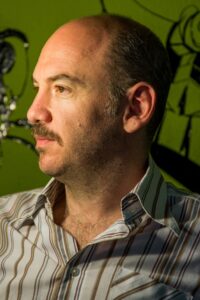 Name: Fadi Baki
Short film: The Last Days of the Man of Tomorrow
From: Lebanon 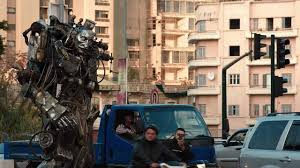