Kristina Valada-Viars: “I keep hoping acceptance of diversity and generational attitude change will shape things differently, and so I decided to write a delicate and specific piece that holds this conversation in some way.“

What was the missing piece in queer characters’ stories that led you into writing yours?

I guess the shortest answer is that what was missing from queer characters’ stories was me. But to go a little deeper, I was reading scripts and seeing films play in the growing LGBTQ+ market that were still often being written, made, and portrayed by people outside of our community. And while the increase of representation in mainstream media is a welcome change from even five years ago, as someone who lives daily in the context of marginalization, I could still feel the presence of that distance from the subject that can easily tip into judgement of the subject in a lot of these offerings. We’ve come so far in my lifetime, and still I found myself longing for authenticity even as our lives become more accepted and present in popular entertainment.

When I was growing up, there were very few examples of queer lives in storytelling that I had access to and those that were available were often stories that held criminality or trauma in some way that was directly related to sexuality and non-conforming gender expressions. There were of course queer stories being made on an independent level that told a larger story (beautifully, many of these films still inspire me today), but as my country has shifted to more inclusive laws around marriage and adoption, the stories I’ve seen that held queer characters focused on a narrative that seemed to me to have the purpose of representing queer families and relationships as no different from the status quo, deserving of access to the privileges enjoyed by status quo heteronormative culture. I’m very much for equality, but not if it can only come in context of erasure of a marginalized culture. In this context it really is a probational equality, or…acceptance under certain terms. This made me think about my experience as an American with Italian ancestry, and how I perceive an intersectionality in the experiences I have had as a member of the LGBTQ+ community and those of my grandmother who saw attitudes towards her culture change dramatically over the course of her lifetime. The offer of equality comes with a cost. Whether explicitly articulated in law or violence or unspoken in social dynamics that directly affect one’s ability to survive, the offer is to get along to get by, and it is not extended equally to all marginalized people in my country. I wanted to contribute to this conversation in this moment of seeing certain members of the LGBTQ+ community being accepted by mainstream culture at a cost to the larger ideals and promises of the movement. When our mainstream culture still struggles with concepts like equity for all and genuine pluralism, I think this will always be the case. I keep hoping acceptance of diversity and generational attitude change will shape things differently, and so I decided to write a delicate and specific piece that holds this conversation in some way.

Does this story come from a personal background? What is the dearest thing to you among these pages?

Oh, absolutely. The dramatization of some primary relationships in my life is very present in this text. And it is set in and around the town where my mother’s family lived in this country until her generation moved away. I would say I hold the experience of not getting what you want but receiving what you don’t even know that you need is very dear to me in this. Unspoken exchange that can have a lot projected onto it by the characters themselves as well as an audience. And the sense of a very specific part that geography, both social and physical, can play in one’s relationship to self. And how all of these issues in my country are, from my perspective, deeply interrelated to the ways in which it prevents itself from fulfilling the promise it makes to its citizens and the world. The metaphor of the bees and yellow jackets as relates to a maternal line and perceived danger as an aspect of repressed trauma is also very dear to me.

What was the style you were looking for? How should your pages “feel”?

It should feel like a coming of middle-age and into oneself story and for that reason to me the time of year is very important. That it is autumn should be palpable, and that it holds a haunted quality the further Z gets into the mountains should also be present.

What are your next projects? How are you planning to see them developed?

I would love to see 2 Spruce Street to completion as a short and am working to develop it into a feature. I have some members of the cast and creative team collected so hopefully the funding will follow. My partner, in life and creativity, and I are working on an experimental documentary short film collection all surrounding the concept of finding and making Home in the context of Black and Queer Liberation practices. After premiering at the Black X and Afrikana Independent Film Festival in the same weekend, we are bringing the first film in the series to Rome in October and will be getting some footage for the third. There are six segments in development and you can follow us @wherecouldwegoseries on instagram. This will be my first trip to Italy and we hope to see Sicily and Campania while we are there this fall if we can do so respectfully and safely. I hope it is the first of many. I would love to make 2 Spruce Street and share it with an Italian audience and see where the conversation could go. Maybe next year in Scario! 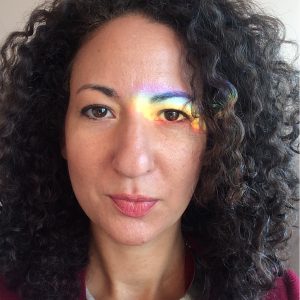