Robertas Nevecka: “A good film challenges the viewer, doesn’t treat him as an idiot and gives him a genuine emotion.”

When I’m creating a story for a film I tend to place some idea into my head and try to live with it for a while. It can be a character, setting, location, event, anything goes. If I’m thinking about this idea once in a while, it naturally develops. But if I have to push myself to think about it, then I change it to something else.

Snow Shelter is set in a cold, war-torn place where people live in poverty and treat themselves like beasts and tells the life of some homeless people. Where does this story come from? What pushed you towards this issue?

I got this idea of a modern post-war society during the Maidan events in Ukraine and the annexation of Crimea. We watched these news closely with anger and fear. This gave me lots of thoughts of what happens when you lose your home.

Why did you choose animation as your expressive medium?

Animation gives me tools of extraordinary visual storytelling. I wouldn’t consider making a live-action film with a destroyed city as a backdrop. Also, I love the quote from animation producer Fred Seibert
– “Cartoons seemed to be the closest visual equivalent to rock and roll”.

A good film challenges the viewer, doesn’t treat him as an idiot and gives him a genuine emotion.

Snow Shelter was my biggest challenge. It’s my debut film after finishing film directing studies and my first animated film. Everything was unfamiliar in the production workflow – developing the visual form, gathering animators who can draw in similar style, micro managing the animated frames and the background art.

Right now I’m in pre-production of short animated film Fishing Docks. It takes place in Lithuania, year 1993. That time was called “wild capitalism”. The country descended into chaos after reclaiming independence from the Soviet Union. For a short period criminals tried to run the country. The story of Fishing Docks is about a bunch of kids playing with fireworks besides a vehicle rigged with an explosive device.

I am thinking about making a feature length film some day. It’ll probably be a live-action film. I have a few ideas for it, but nothing sticks yet 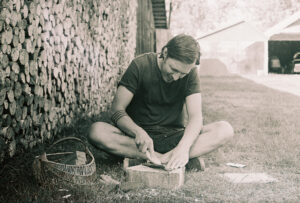